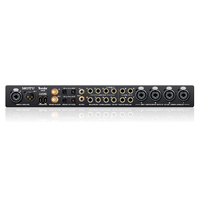 The new take on MOTU's traveler interface is up there with some of the most powerful, yet affordable portable recording devices in the world.

A Must Have for the Traveling Audio Engineer
The new take on MOTU's traveler interface is up there with some of the most powerful, yet affordable portable recording devices in the world. With a multitude of inputs and outputs (28-in/30-out), including four combo inputs with world-class pristine preamps, this workhorse of a unit packs a surprising punch for it's compact size.

It comes with all the bells and whistles you'd expect from MOTU, including DSP-driven effects and CueMix digital mixing software. What's more, it will run solely from bus power off your computer or even battery power if required, meaning you can take it on the road for on-site recording wherever you go.

Great for Stage or Studio
The Traveler-mk3 is equally well-suited for studio, stage and remote locations, with or without a computer. As an interface or stand-alone mixer, the Traveler-mk3 provides 28 separate inputs and 30 separate outputs, including four XLR/quarter-inch â€œcomboâ€ mic/instrument analog inputs equipped with pre-amps, individual 48V phantom power switches and Digital Precision Trimâ„¢ controls conveniently adjusted from the front panel or CueMix FXâ„¢ software.

Impressive Connectivity and Signal Routing
Connect all of your audio instruments and gear, including mics, guitars, synths, keyboards, drum machines and even effects processors. Record, monitor, route and process all of these live inputs using the professional on-board CueMix FX digital mixer with no latency and no processor strain on your computer. Apply hardware DSP-driven effects processing to inputs, outputs, and buses independent of your host computer.

Backup Headroom for Analogue Inputs
When recording from the four mic/guitar inputs, the Traveler-mk3â€™s signal overload protection gives you an extra 12 dB of headroom above zero with no clipping or harsh artifacts.

Take it on the Road
After programming the on-board mixing in the studio, unplug the Traveler-mk3, remove the rack brackets, and take it on the road for operation as a portable, bus-powered audio interface for a laptop or battery-operated stand-alone mixer with effects. The Traveler slides easily into your backpack and fits neatly beneath your laptop. All mixing and effects parameters are adjustable using the front panel backlit LCD. Record extended sessions even in the most remote locations with the complete freedom of field battery power.

Compatible with Mac and Windows
The Traveler-mk3 provides cross-platform compatibility with Mac and Windows and all of your favorite audio software and host-based effects via WDM/ASIO/Core Audio drivers. Or you can use the included AudioDesk workstation software for Mac, with 24-bit recording/editing and 32-bit mixing/processing/mastering.