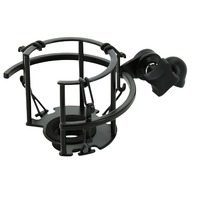 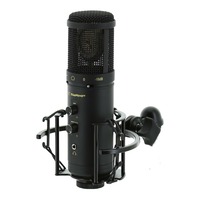 Standard SU600 24-Bit - The SWAMP SU600 offers a large diaphragm condenser capsule, an A/D converter that outputs a USB signal which works on PC and MAC, and direct monitoring with H/P output.

Recording and Podcasting USB Microphone
SWAMP's SU600 USB mic has been designed for home studio voice and instrumental recording. The SU600 has a large diaphragm condenser capsule similar to the top studio recording microphones, but with the simplicity of an internal A/D converter that outputs a 24-bit or 16-bit USB signal for a high quality direct connection to any PC or MAC computer. Compatible with any computer or audio recording software (DAW), the SU600 is plug and play for easy setup and with the 3.5mm headphone output, monitoring yourself or hearing playback tracks whilst you record is possible.

Studio Vocals or Podcast Presenter Warmth
If you are looking for that 'radio presenter' style of clarity and warmth in your podcast recordings, or that cystal clear clarity that you hear from lead vocalists on your favourtite songs, then a 'condenser microphone' is a must. The large diaphragm condenser capsule on the SU600 is the same type that you find on the top studio condenser microphones, allowing for incredibily detailed recordings with relatively flat frequency response allowing for the best possible results when mixing and mastering.

Monitor while you Record
Featuring a 3.5mm headphone output, this mic allows you to monitor (hear) yourself whilst recording. Plus allowing you to playback a pre-recorded track while you are recording another over the top. Adjust the playback track volume on your computer, then use the Gain and Headphone control knob on the mic to get the right mix between hearing what the mic is recording, and the playback from the computer. This in/out audio functionality is required for professional home studio's and comes at a fraction of the cost with the SWAMP SU600.

Plug and Play
With plug and play functionality, the SU600 simply needs to be plugged into a USB port on any MAC or PC computer, and drivers will be automatically installed. Check your 'sound' or 'audio' settings for further configuration if required.

By: Hoang on 18 October 2020
I have had this mic now for almost a month and I use it primarily to talk to the audience on my live streams. The quality is excellent and just works so easily out of the box. I didn't realise when I ordered but the microphone when turned on has a very attractive blue light coming from within. It adds a bit of flair to my live streams which I wasn't expecting, pleasant surprise!! Highly recommend this mic as it's also well priced.
5 (5)

By: Warren on 14 June 2019
I've had one for a few months now and I am impressed. Great pick up quality and headphone jack quality is great. I use this for streaming, compared to the quality of similarly priced microphones on the market, this one has more Hz range and bit rate, all metal body with a solid build, PLUS you get more extras than 98% of the other offerings on the market. Points of note: On installing, mic showed up not as a microphone but as a line device (which confused me and took some time to setup) which after speaking with Tech support, was a batch issue in production. This did not affect the workings of the mic whatsoever. Tech support was awesome and I've kept the mic as there was nothing wrong with it. The little stand that came with mine actually cracked when the legs were fully deployed, the plastic split and seems to be a different gauge that does not allow all three legs to deploy - Also not a problem as I use a boom, which you should get, this mic has a nice LONG Usb cable which is well shielded. Cannot go past this for value and quality.
5 (5)

By: James on 1 May 2018
I purchased this mic to mainly do voice overs on my Mac. I found the set up to be easy and Garageband had no problem identifying it. The Mic quality is excellent and the performance is very good. I would recommend this mic to anyone wishing to do voice recordings in a PC or MAC environment.
5 (5)

Music teachers and students looking for the easiest way to have great sounding audio for Zoom webinars / conferences or Skype sessions, should consider a USB condenser mic like our SU600-16B. The SU600-16B is 'plug and play', and should work automatically

Podcasting has become a phenomena, and creating a professional-sounding podcast is not as simple as it might seem. USB microphones make podcasting simple as they do not require any external audio interface or phantom power, simply plug in and record.