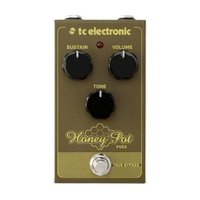 The Honey Pot Fuzz pedal is full of fat, sweet and girthy sustain tones. It's one of the most versatile fuzz pedals available today. It is easy to program a myriad of cool and creative fuzz tones to suit sustained lead and gritty rhythm rock chords alike.

Sweet Vintage Style Fuzz Pedal
The Hony Pot Fuzz is full of fat, sweet and girthy sustain. It is one of the most versatile drive pedals available today. It is easy to program a myriad of cool and creative fuzz tones to suit sustained lead and rhyhm rock chords alike.

The Bee's Knees
Honey Pot Fuzz is the kind of fuzz box that blurs the lines between fuzz and distortion in a most pleasing way. There's plenty of volume on tap. It's just begging for a loud tube amp to really open up and breathe. The range of gain available in Honeypot Fuzz goes from a slightly gritty grind, almost like an overdrive, and all the way to massive walls of sticky honeycomb-structured distortion with seemingly endless sustain and a tone that's fat and nasty but with thick, sweet highs. Honeypot covers a wide musical territory that spans all the way from The Black Keys and The White Stripes to 90's alternative rock all the way up to the Dark Side Of The Moon with a beautiful creamy and vibrant sustain.

Sustain for Days
Honey Pot Fuzz has a knob just for giving you the exact amount sustain you want for those epic solos where you want to hang on a bended note for at least a few bars, or the thematic wall of hanging power chords that hangs on forever while you're building up to a climactic finish.

Classic Fuzz Tones
Instantly recognizable fuzzy distortion circuit faithfully captures the sound of iconic rock guitar albums from the 70s and after. There's no doubt you've heard it - fat buzzing power chords with a life of their own, singing, violin-like lead lines that sustain for days and tight, rich riffing that holds its own in a mix.

Built to Last
Honey Pot is based on a high quality analog circuit for rich, satisfying fuzz tones and an exterior metal chassis built to last. Top mounted jacks stay out of the way on your pedalboard and let you cram in several Honeypots in series if you're so inclined and true bypass technology keeps your signal nice and tidy. 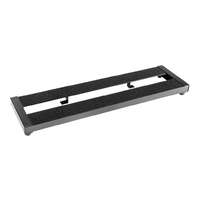