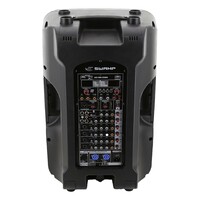 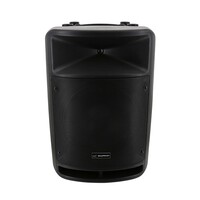 Versatile PA System 8 Channel Mixer
The MS-5384 has been tailored to suit simple PA speaker events involving speech and music - plug and play operation for the 2x wireless mics, and bluetooth connection for audio means setup takes a few seconds and you never need to touch the mixer again. While built-in 8 channel mixer, with 4 mic preamps, provides enough inputs for musicians and small bands directly plug into the mixer for performance. Vocalists and guitarists will appreciate the great range of 16 DSP effects and quality of the 32-bit effects engine. Other features include USB input for MP3 playback and 48V phantom power to power any condenser microphones.

Active and Passive 15" Speakers
The PA system includes an active and passive 15" speaker setup, where the mixer and amplifier resides inside one speaker (active) which requires a power cable, while the 2nd speaker (passive) simply has an input for a the provided speaker cable that connects to the active speaker to carry the signal and power. This ensures a simplified setup with only a single power point required to run all speakers, mixer and wireless mics.

Connect Two Additional Speakers for 1200W of Power!
The additional paralel speaker outputs (coloured blue) allow for an additional passive speaker rated at 8Ohm to be connected and powered by the MS-5384, with an output for the Main Left signal and Main Right signal. By connecting 2x 8Ohm speakers in this way (parralel wiring) the amplifier will see a load of 4Ohm and output 600W rather than 300W, effectively doubling the potentional power output. Ensure that only 8Ohm speakers are used, to ensure the load does not drop below 4Ohm which could damage the amplifier and speakers and void warranty.

FOH or Wedge Design
These tough ABS speaker cases can either be used on speaker stands for Front of House. It can also be sed on its side as a wedge. For a simple but effective setup, the active speaker can be set for FOH whilst the passive can be used as a wedge.