Electro-Voice (EV) is an American manufacturer with a history dating back to 1930. Its research, development and manufacturing concentrates on audio equipment, including microphones, amplifiers, and loudspeakers,and is also focused on pro audio applications such as sound reinforcement. As a subdivision of Telex Communications Inc. since February 1998, Electro-Voice markets products for use by consumers as well as small or large concert venues, broadcasting, houses of worship, and in retail situations.

The leader in the field of many advancements, EV developed the noise-canceling microphone during World War II. Electro-Voice launched its RE Series of microphones in the 1960s, notably the RE15, which was used extensively by musicians on television shows. Today EV manufactures widely used broadcast microphones as well as loudspeakers and various other professional audio equipment, which are highly regarded in the industry. 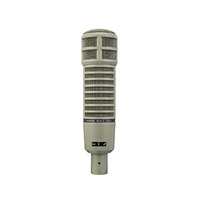