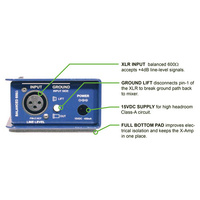 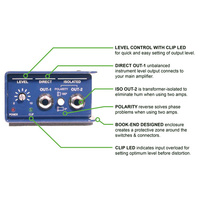 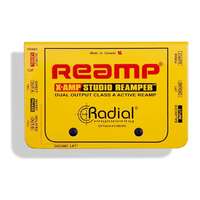 RADIAL X-Amp Active Re-Amplifier
These unique device allows a band to record guitars and instruments in a single take, via DI boxes, then at a later time "re-amplify" the recorded signals back into guitar amplifiers and cabs to capture an isolated signal with the freedom of playing around with amps and settings. All the while still having that 'take'.

Play Once, Re-Amplify and Record
The Radial X-Amp is an active re-amper that allows a track from a multi-track recorder to be played through a guitar amplifier(s) and re-recorded. Players and engineers can experiment with different combinations of amps and effect pedals long after the original performance has been recorded to build the thickest and chunkiest guitar tracks.

Class-A Radial Engineering Technology
The X-Amp handles level and impedance conversion with an active Class-A circuit which reproduces all the tones and inflections of the original performance. X-Amp drives guitar amps as if the player was still plugged into it! X-Amp accepts a balanced +4dB line-level signal and outputs two unbalanced instrument level signals that can connect to effect pedals and amps. To prevent ground loops between the recorder and the amps, the input features a ground lift. X-Amp allows simultaneous use of two amps. The second amp output is buffered to prevent signal loss, transformer-isolated to eliminate hum caused by ground loops and features a polarity reverse to align out-of-phase amps. The output level control and clip LED aid in setting levels quickly and saves you many trips back and forth between the mixer and amps. Finally, the X-Amp is packaged in an innovative and tough 14 gauge steel welded I-beam enclosure that makes it impossible to torque the PC board.

Using the X-Amp is easy: start by recording a dry track using a high quality direct box like the Radial J48. Send the new track from your recorder via the X-Amp to your guitar amps, effect pedals or combinations thereof. Once the basic track has been recorded, replacing or adding tracks can be done well after the session player has gone home. This eliminates tiresome repetition and assures a fresh vibrant performance on the final recording. Furthermore, by driving two amps at the same time, new sounds and textures can be created while allowing you to make artistic decisions as the recording progresses.

Durable, Built Like A Tank
As with all Radial products, the X-Amp is built like a tank to provide years of trouble-free performance. An internal I-beam skeleton provides maximum protection against external stress which could cause solder points to fail. This is supplemented with an innovative bookend design that creates a protective zone around the switches, potentiometer and connectors. A full bottom no-slip pad performs double duty by keeping the X-Amp from sliding around when placed on a vibrating amplifier while also providing electrical and mechanical isolation. Reamping works equally well on bass, keyboards, drums and voice. Once you start Reamping, you will never record any other way.

The Radial X-Amp… the active Reamp for professional recording engineers. 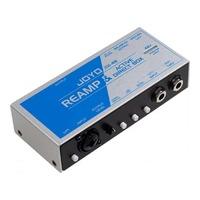