The Radial JPC is an analogue stereo interface designed to help solve the buzz and hum problems commonly associated with connecting a computer to an audio system.

Quiet Computer Sound
The Radial JPC is an analogue stereo interface designed to help solve the buzz and hum problems commonly associated with connecting a computer to an audio system. This is accomplished by combining active buffers and transformer isolation to create an effective 'hybrid' circuit.

A Plethora of I/O
Intended for professional field use, the JPC comes fully loaded with choice of ¼", RCA and 3.5mm input connectors that make it easy to interface with all types of unbalanced audio sources such as computers, iPods, and CD players. It is equipped with isolation transformers to eliminate hum and buzz caused by ground loops and to further reduce system noise; while AC blocking capacitors in the active circuit prevent pollution from the audio system from bleeding back into the computer. Outputs are XLR balanced mic level for easy interface to snake systems and PAs. Powering the JPC is accomplished via 48V phantom from a mixing console. This enables the JPC to be used in concert environments without requiring an external power supply.

Plug-n-Play
The JPC is a great sounding stereo direct box that is plug-and-play and easy to use with practically any consumer electronic device. The noise eliminating advantages makes the JPC a must-have problem solver for any technician's audio kit.

Using the JPC with a computer
Computers are often the cause of noise in the PA system. The JPC's combination of transformer isolation with an active drive circuit helps reduce noise by eliminating stray currents.

Using the JPC with a DJ setup
The JPC is well suited to handle the type of audio generated by CDs and digital audio files. By isolating the the source with the PA system you also eliminate noisy ground loops.

Using the JPC with an iPod
The JPC's 3.5mm (1/8") TRS jack makes it easy to interface portable playback devices like the iPod. This makes it easy to bring unbalanced audio tracks into the PA system via the balanced mic input of a console. 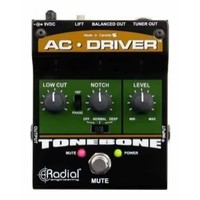