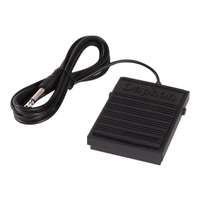 Sustain or Damper Pedals
Sustain pedals are used by keyboard players to emulate the damper pedal on a real piano. While depressed, any key played will continue its sustain indefinitely, until the sound fades out or sample is done sounding. The effect is mostly used on standard keyboard sounds to add colour or to create a seamless change between notes or chords.

Signal Polarity
It is important when buying a sustain pedal to make sure it is suitable for your keyboard. Depending on the manufacturer, the sustain function of a keyboard can have either a negative or positive signal polarity, meaning that some pedals may not work as desired with some keyboards (i.e. when the pedal is depressed there is no sustain, when it is lifted the sustain rings). Some sustain pedals include a polarity switch that reverses the signal polarity, making it compatible with any keyboard.