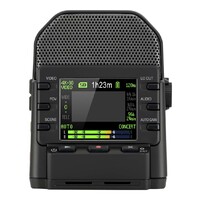 The perfect tool to record performances, music classes and rehearsal sessions in 4K video, as well as to stream to YouTube, Facebook, Twitch and other platforms. Easily connects with iOS devices for audio enhancement of your videos. Point, aim and capture

Zoom Q2n-4K Video Recorder Webcam Streaming
The perfect tool to record performances, music classes and rehearsal sessions in 4K video, as well as to stream live to YouTube, Facebook, Twitch and other platforms. Easily connects with iOS devices for audio enhancement of your videos. Point, aim and capture.

Look As Good As You Sound / Sound As Good As You Look
Easily capture your full band or solo act using five field of view (FOV) settings. The Q2n-4K’s 150-degree lens and color LCD make it easy to frame the perfect shot. At the touch of a button, the Q2n-4K captures premium video recording at up to 4K Ultra HD resolution. 12 ‘Scene’ presets allow you to record your performances in a wide range of environments, including “Jazz Club”, “Concert Light”, “Dance Club”, and “Outdoor”. The Q2n-4K even features an “Auto” scene setting, which will detect your current lighting and select the appropriate balance for you.You work hard to cultivate your sound. The Q2n-4K's X/Y stereo microphones are designed to handle everything from saxophone to heavy metal.

Live Stream with Great Audio
The Q2n-4K is the ultimate musician’s webcam, able to stream performances live to Facebook, YouTube, Twitch and more. You can also output the Q2n-4K’s audio to your iOS device for mobile podcasting and streaming. For iOS, the iPad Camera Connection Kit or Lightning to USB Camera Adapter is required.

Watch it on a Big Screen
With a micro HDMI video output, the Q2n-4K lets you watch your video in high definition on your TV.

File Types and Storage
Video (with audio) is recorded as a MPEG-4 (MOV) file. When using the “Camera Off” mode, audio data can be saved independently in uncompressed WAV format (up to 24-bit/96 kHz). The Q2n-4K can record on microSD, microSDHC and microSDXC cards. And when using the Q2n-4K with a microSDXC card, you can record longer sessions (up to 256 GB) as a single file.

Supplied in the Package: