Synopsis: Sound recording comparisons of the Shure SM57 and iSK DM-57 dynamic instrument microphones. Recordings were taken in the same environment at the same time and demonstrate the similarities and differences between the two instrument mics.

The first test was conducted at 102 dBspl in an acoustically controlled environment with an overdriven guitar tone.

The second test was conducted at 114 dBspl in an acoustically controlled environment with a clean guitar tone.

About the microphones used:

The SM57 is a rugged and well built proven design dynamic microphone that has been in the industry for over 40yrs. When conducting the test the results were a little disappointing. Considering the SM57 is the industry leader, I was expecting a miracle sound from the microphone. The lower frequencies were far overbearing over the higher frequencies so much that the sound was actually muddy with a slight definition in the higher notes. I have used this microphone many times recording acoustic and electric instruments and have gathered that its strong point is within acoustic recording and if so desired has a particular flavor for guitar cabinets.

Following the design of the original SM57, the ISK DM57 takes a very likening appearance to the SM57. The microphones build quality is near the same as the SHURE product and the only real difference is the SM57 is slightly longer.To be honest this microphone blew me away when I used it in comparison to the SM57, I could capture the true tone of the vintage 1974 cabinet and the guitar without any added equalization. This to me was amazing proving that I could nearly have a perfect take with no console EQ or compression. The microphone in itself seems to have a natural High pass filter starting at around 75hz, this is apparent on the graph and the results below.With this in mind I realized that the microphone needed no further EQ and sounded great straight out of the box.

The SHURE SM57 delivers a far better response graph than the ISK DM57. This means that the SM57 can deliver far more frequencies than its cheaper counterpart. But with this said the proof is in the recording and not so much the technical examples. When both samples are listened to the proof is inherent that the $199rrp SM57 doesn't't win hands down. The forty something dollar ISK DM57 provides far better clarity and definition to both the guitars tone and warmth proving that the cheaper item is far more usable straight out of the box. Now with this in mind the SM57 does come with a 40 year industry winning title so I cant comment on the durability of the DM57 against the SM57.

To be honest the DM57 is a far more versatile microphone than the SM57 and proves that the price is not always aligned with the quality of the product. In saying this the SM57 has its many uses in a studio and in live events depending on what flavored tone you are seeking.

Well done to ISK for producing in my observation a good competitor to the legendary SHURE SM57.

All tests and reports performed and written by Audio Engineer Cristian Saez in an acoustically controlled studio environment. 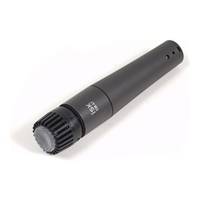