The M-series mixers from SWAMP boast a sleek, compact design in a durable lightweight housing at an affordable price. Featuring all the controls you'd expect from a modern mixing console, the M-series are a no nonsense workhorse suited perfectly for a gigging band, solo artist, function venue, or rehearsal studio.

Built in Audio Playback Module with Bluetooth, USB, or SD Card
The M series includes an on board MP3 player / audio playback module that be connected to via Bluetooth or direct, wireless connections to any smartphone, or laptop for simple audio playback. Or you can also connect using a USB drive or SD memory card. It's also an ideal choice for gigging bands who want to play smooth tunes between sets to keep the crowd hungry.
Features:

Solid with daily use for over a year

By: Anonymous on 10 June 2019
I've used this mixer every day for 1 year and 2 months exactly now, has been used at outdoor events getting dust and rain spray and hasn't missed a beat. hard to beat for the price, having 4 xlr outs. only wish the .wav recorder was higher bitrate.
5 (5)

By: Chenier Fitchette on 28 May 2019
This unit has just about all you'd need function-wise for a live gig or recording/rehearsals. The simple layout means most novice sound operators can get it going. The price shouts "cheap" but this is not junk. It is solidly built and all faders and pots are super smooth. The extra outputs are welcome. I run a larger Yamaha desk when I need more inputs, but this is my spare and go to for less required inputs. I just bung in my graphics/compressor and presto, pro-sound. Pleasantly surprised!
5 (5)

By: Martin Weekes on 6 November 2017
Really happy to have found this mixer. Our needs were for a simple mixer for an auditorium with more than 6 XLR mic inputs. The versatility of the console is terrific and the extras of graphic equaliser and MP3 recorder onboard are very handy. Fast delivery too
5 (5)

Bang for your Buck big time

By: Dave Fragar on 24 August 2017
What an amazing little desk these are - bought one to use as a back up but now being used as a front line desk. This is such a great unit would love to replace some more better known brand units with these units, simply for the fact they just work as they should. Simple home studio mixer to full on FOH desk for your touring band, this unit is capable of doing both.
5 (5) 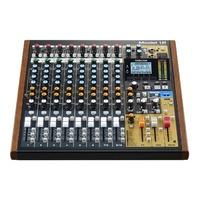