The Macdaddy story began in June 2012 when professional musician and amateur woodworker Adam Truscott, became frustrated with the stompboxes available at the time. This problem led him to designing and redesigning the pickups and trialing different body shapes until he had a product that became the MacDaddy Wombat, the staple of the range. When Adam was content with the Wombat he turned his attention to designing the other models in the range. The Platypus was the next model, a smaller foot print with the same wombat thump. 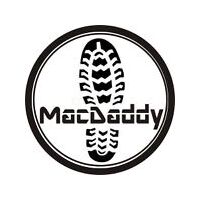