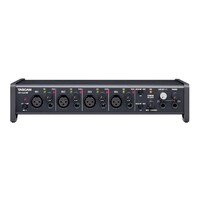 Ultra-High Definition Discrete Architecture
Tascam US-4x4HR employs an Ultra-High Definition Discrete Architecture mic preamp design that delivers audio with extremely low self-noise to capture every detail of your musical performances. Because of the wide dynamic range, this interface can also be used with dynamic microphones in addition to condenser mics. This makes it ideal for a variety of applications from recording vocals, pianos and acoustic guitars. With 4 XLR mic inputs and 4 TRS line inputs (IN 1-2 guitar input support) audio interface with implemented MIDI IN/OUT ports. Equipped loopback function and OBS support makes this interface an excellent choice for podcasts and live streaming. The new US-4x4HR offers simple and intuitive operation, sophisticated looks, a rich assortment of software bundles, and improved audio performance with 192 kHz support, thanks to the newly enhanced audio circuit.

Optimal Interface for Home Recording
The US-4x4HR is equipped with 4 mic/line inputs with guitar input support on IN 1-2 plus 2 headphone outputs that can be put to use in various music/multi-media production environments such as vocal/guitar simultaneous recordings and multitrack recordings. The unit is also equipped with a USB-C port to be easily powered by USB bus power.

Zero-Latency Direct Monitoring
Direct monitoring will diverge signals before sending them to the computer, resulting in smooth, in-time monitoring without any sound delay during both recording and performance.

Interface for Podcasts and Live Streaming
The US-4x4HR can be used with computers or smartphones to easily create podcasts or live streams. The audio can be switched between stereo/mono, and the loopback function allows the audio from the computer to be returned to the streaming software for playback during live streams. US-4x4HR also supports OBS, which is popular and used worldwide.

Equipped with MIDI IN/OUT
The MIDI IN/OUT terminals allow for other MIDI external devices such as keyboards, drum machines, controllers, etc. to be synchronized and controlled.

New Audio Interface Engine
Capitalizing on our experience of being one of the pioneers in manufacturing USB audio interfaces, we achieved further stability in our native driver. The audio buffer size can be set starting from 4 samples (Windows only) to give the best performance to every different environment; maximizing the capability of the computer in use while creating a low-latency environment.

Robust Metal Casing
The US-HR models share a solid and practical design that has been applied to withstand long hours of hard use. Its robust metal jacket not only improves its durability but, combined with dye-cast aluminum side panels, provides a sleek and eye-catching design. In addition, all models have just the right weight, so they won't move when cables are connected or disconnected.

The essential podcasting interface is here. Introducing Vocaster One and Vocaster Two. Tell the world! Key features such as Auto Gain, Enhance, the Easy Start tool, provide users with all the things they need to get recording.