Advances in Music Technology and the demand for live music has come to a point where the old way of playing music just doesn't cut it.

The Latest Tech for Vocals in Modern Music
Advances in Music Technology and the demand for live music has come to a point where the old way of playing music just doesn't cut it. Especially for singers, recording a double track or harmonizing with your own voice, editing, and all the special effects that alter one's voice to make the music more interesting is not possible when playing live with your band - until now! The TC-Helicon VoiceLive Touch lets you do all kinds of crazy stuff to your vocals just like how it would exactly sound on a (heavily edited, tweaked and produced) recorded song! With the latest tech from TC-Helicon, you are a few touches away from a stellar live performance!

Pro Vocals On-The-Go
Getting a great vocal sound can be tough. Touch 2 automatically takes care of vocal tone with adaptive EQ, compression, de-essing and gating. This frees you up to focus on your performance with hyperactive slaps and echoes, aggressive distortion and Hardtune in addition to sweetening effects like deep reverb, doubling and those uncanny TC-Helicon vocal harmonies.

In Touch With Your Performance
Want to instantly add harmony voices, vocal distortion or a timed echo? The touch buttons allow you to explore adding and removing effects and tonal colors seamlessly while you sing. Use the slider bar to rock, flutter and transform your sonic landscape. Each preset also has the Hit button ready to launch multiple effects with a single touch.

Send In The Clones
Looping multiplies your musical persona so you can create a whole composition by yourself. VoiceLive Touch 2’s 6-track looper has lots of loop time, LoopAssist™ for better loops and ear-catching effects like a resonant filter, stutter effects and reverse to make your one-person creations easy, unique and incredible.

Artistic Pedigree
Professional users of the original VoiceLive Touch have been instrumental in helping us develop the power user aspects of Touch 2. For example, artists like international rising star Kimbra helped us discover additional MIDI abilities useful when you want to extend your creativity using other real-time controllers.

Endless Styles and Genres
The GENRE feature allows you to easily browse hundreds of presets. Choose a style that suits you and VoiceLive Touch 2 will list the presets that fit your preference. If that wasn’t enough, you’ll be able to download new and exciting artist presets each month for free via VoiceSupport.

Make It A Hit
HIT is a performance-inspired feature for building intensity into any vocal performance. Every preset gains an A/B function via the HIT button – press to add dazzling effects for the chorus, or strip it down for the verse, you decide!

A Good Set of Ears
Embedded stereo RoomSense mics can control your harmonies from instruments nearby, replace the cabled mic for headphone practice or add ambience to your headphone or in-ear monitor mix. 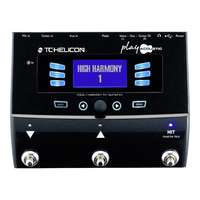