Synopsis: At first glance, all acoustic guitars can seem basically the same. But these glances are deceiving, as there are literally thousands of types and models of acoustic guitars to choose...

At first glance, all acoustic guitars can seem basically the same. But these glances are deceiving, as there are literally thousands of types and models of acoustic guitars to choose from. Those beginning to learn the guitar often will start with an inexpensive acoustic model to forego the need for an amplifier, though professional musicians use acoustic guitars that can cost tens of thousands of dollars to get the sound they want to achieve for recordings and live shows. So, whether you are a beginner, a professional or somewhere in between, it's important to understand exactly what the differences are in the types of acoustic guitar, and which type will best suit you and your budget. The choice will depend on the type of music that you play, what you want your sound to be within that genre (or those genres), your skill level and how much you want to spend.

No matter what type of acoustic guitar best fits your style, the basic construction will be largely the same, made of wood with curved sides connecting the back with a braced top. However, the type, shape and size of the wood will drastically change the sound of the guitar, as well as how it is built. Many of the most expensive acoustic guitars are still hand-crafted, and though the sound will be more refined, the price will reflect the intricacy of the build. Because of this, many players will find different nuances of sound in individual guitars even when they are the same model of the same brandâ€”age is also an important factor in the sound, as the wood will expand and contract as the guitar gets older.

At the most basic level, there are three types of acoustic guitars: classical guitars, steel string guitars and acoustic bass guitars. Here, we'll discuss the intricacies of all three.

Beginners often choose classical acoustic guitars to learn how to play, as the nylon stings are easier on the fingers than steel strings. Since most acoustic and electric guitars use the same standard tuning (E-A-D-G-B-E), these guitars allow beginners to learn to play guitar without ripping up their fingers. Additionally, many classical acoustics come in smaller sizes, such as the 3/4 Size Classical Nylon Sting Acoustic Guitar, perfect for young beginners in need of a smaller body size guitar.

Today, steel string guitars are much more common among guitarists. This is attributed to the fact that the steel strings provide a louder and brighter sound, which many look for in modern music. Steel string acoustics are often heard in today's rock, country and blues songs, and also can be found in many other genres, as well.

In additional contrast to classical guitars, steel string models typically come in a wider variety of shapes and sizes, all of which will influence the sound of the guitar. The most common steel string acoustic model today is the dreadnought. Designed by Martin in the early 20th Century, the dreadnought was larger and deeper than most acoustic guitars that came before it. This produced a louder sound with more low-end than other guitars, a contributing factor to its continued popularity today. The Artist Solid Tasmanian Blackwood is an example of the dreadnought design.

All of the aforementioned steel string guitar models are called flattop models, since the tops of these are perfectly flat. Steel string models can also come in arch-top models, though these usually have "f-holes" for their sound holes instead of a large hole under the strings. This results in a lower volume, and consequently, many of these guitars have additional pickups.

Flattop (and occasionally classical guitar) models often will have pickups as well, so they can be plugged in during live or recorded performance. As opposed to electric guitar pickups, which are often placed under the strings on the body of a guitar, acoustic guitars often use microphones inside the guitar for amplification, or piezo pickups that rely on the vibration of the strings. These methods tend to better replicate the natural sound of the instrument itself.

Many steel string guitar manufactures also make 12-string models of acoustic guitars. These consist of six groups of two strings each, each tuned to the same note an octave apart. 12-string guitar have become common for a fuller, more lush acoustic sound

Additionally, many players prefer to use acoustic bass guitars in settings with other acoustic instruments for a more natural sound. From bluegrass jams to episodes of MTV Unplugged, the acoustic bass can lend a different sound for those who desire something different than the usual electric bass sound.

There's an acoustic guitar out there for every musical style and every price range. Armed with the above information, you'll be able to pick out the one that best suits you. 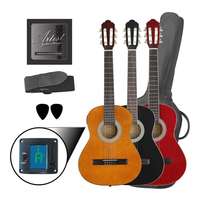