Synopsis: For a professional and simple solution for recording audio into a computer, using an analog mixer with a USB or Firewire output is the easiest, and least expensive way to get record sounds digitally onto an PC, MAC or laptop computer.

With each passing year, home recording options exponentially grow more numerous as well as becoming, in general, less expensive and more user friendly. Whereas just a couple decades ago, few had the financial or spatial ability to obtain all the required analog equipment to create a professional sounding recording, now this feat can be achieved with little more than a personal computer. Some of today’s best sounding and most innovative recordings originate in someone’s bedroom.

With that being said, the growing number of options can seem daunting to someone getting started in home recording. These range from plugging instruments directly into the computer and using a system sound card to utilising an audio interface to using preamps and many more. As with most things related to recording and music in general, the best setup for you really depends on your specific needs and budget, but one of the easiest, best sounding and least expensive options is to go with an analog audio mixer with a USB or Firewire output.

Here’s the idea of how these function: take a normal audio mixer that most musicians are at least somewhat familiar with, add a USB or Firewire output, and send the signal from the mixer into a computer, using the mixer to bypass the computer’s sound card (which on many computers will provide a less than desired level of sound quality). Depending on which mixer you use, there will be varying degrees of functionality, but most include XLR microphone and ¼” line level inputs, as well as faders and knobs to control volume, EQ and panning. Having a USB or firewire output on your mixer gives you the easiest and most inexpensive way of getting your sounds into an audio recording program / digital audio workstation (DAW) software such as ProTools, Logic, Acid and Cubase.

While the mixers themselves will mainly vary on functionality depending on the model, here’s a look at the differences between mixers with USB ports and those with Firewire ports.

Mixers with a USB output are a great and inexpensive option for recording directly to your computer, particularly in live band situations. Many clubs and other venues use these for live recordings of bands playing, and many bands use them to record practices to improve their songs and performances.

The reason behind the widespread utilization of USB mixers comes down to the ease of use. Let’s use the Mackie ProFX12 12-Channel Mixer with USB, a popular and inexpensive choice, as an example. With 12 channels available, you can mic an entire band (with separate drum mics on each drum), not have to worry about preamps, as they are built in and EQ each individual track as well as the overall mix itself. After you’ve got your mix set, with the mixer connected to a computer via USB, the signal will be sent into the DAW software you are using and then you’ll have a great sounding digital copy of your recordings.

While the mixer portions of Firewire mixers function in basically the same fashion as their USB counterparts (depending, of course, on the model you are using), Firewire mixers offer further versatility when it comes to sending signals to your computer. The main advantage is that Firewire outputs can send each track individually into your computer recording software, whereas most USB mixers will only be able to send the overall stereo mix. This is obviously desired by those that want to have further sound editing control over each track once it is in the software.

Additionally, Firewire can offer higher quality sound on recordings. Though USB 2.0 features a transfer rate of 480 Mbps versus Firewire’s 400 Mbps, the total USB rate is shared among all USB devices connected to the computer, while the Firewire rate is dedicated to each port. Thusly, in practical applications the Firewire is going to give the mixer a higher transfer rate, resulting in a cleaner and clearer sound.

Of course, there are downsides to Firewire, as well. Mainly, because they are more versatile, mixers with Firewire outputs typically cost more than similarly equipped USB mixers. Additionally, depending on your system, you could lack Firewire ports (or have one that is already in use), which would obviously affect the end price.

One of the best and most popular series of mixers with Firewire outputs is the Mackie Oynx-i series mixers. Depending on the model, you can record from 8 to 16 simultaneous tracks, each with individualized EQ, pan and volume settings. Additionally, as mentioned above, each track will be recorded separately into your DAW software, and the Oynx-i series is qualified to work with most popular software applications including ProTools 9, Logic, Cubase and Ableton Live.

All Mackie Onyx-i mixers use a high quality 24-bit/96kHz recording interface for optimum sound. Furthermore, each model includes preamps as well as phantom power options to power your condenser microphones, making the Oynx-i series of mixers one of the most affordable lines given their high functionality.

All in all, analog mixers with USB and Firewire outputs are a great and simple way to record music. Which option you end up choosing will depend largely on your exact recording needs, as well as your budget. 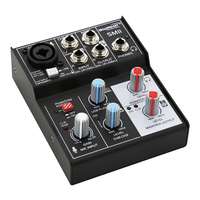