A buyers guide to Guitar Strings


Synopsis: Whether browsing for strings online or standing in a music store, the numerous options for types of guitar strings can seem overwhelming. Here we’ll look at the different options available and explore how to best choose the perfect string for you. Whether browsing for strings online or standing in a music store, the numerous options for types of guitar strings can seem overwhelming. A large number of companies manufacture different types of strings for different types of guitars. Even after determining which type of string is right for your particular guitar (e.g. acoustic, electric, bass), you must then choose the brand and gauge, among other factors, that will work best for you. Here we’ll look at the different options available and explore how to best choose the perfect string for you.

When choosing acoustic guitar strings, the first thing to determine is what type of material your strings will be made from: nylon or steel. If your acoustic guitar is a classical (Spanish) model, then you will most likely choose nylon strings to achieve the traditional sound of a classical guitar. Nylon strings are also often used by beginners, as the nylon string is softer on the fingers as callouses are being developed.

For a sound more in line with most rock and country music being played today, most acoustics that are not classical models (dreadnought, jumbo body) will be equipped with steel strings (though sometimes other metals—usually bronze—are used today, these guitars are still referred to as steel string guitars). For these, the two highest strings will be “plain,” consisting of just one metal material. The remaining four strings will be “wound,” meaning they have a core metal material with another material (usually bronze) wrapped around that core. These can be roundwound or flatwound, depending on the shape of the bronze. Roundwound strings tend to create more “finger noise,” (i.e. squeaking) and cause more fret wear, but tend to be less expensive and produce a brighter sound than their flatwound counterparts.

After choosing the type of string, the last choice will be the gauge, or thickness, of the string. String gauges are typically measured in “inches”. Acoustic strings range from Extra Light (with a gauge of .010 to .047) to Medium (with a gauge of .013 to .056). There will be slight changes of tone when you switch gauges, though the most important thing when choosing gauges is determining which strings feel the best to you. Many beginners start with lighter gauges because they tend to be easier on the fingers.

Electric guitar strings are very similar to steel string acoustic strings, thought they come in a wider variety of gauges to fit different electric playing styles. Most electric guitar string sets only have three wound strings, as opposed to the acoustics four, leaving the G string (on a standard tuned guitar) also “plain”. Many electric players prefer this, as it lends to easier bending, which is an important factor when playing the electric guitar. For this same reason, electric guitar stings come in lighter gauges, starting at Extra Super Light (with a gauge range of .008 to .038). While lighter strings do lead to easier bending and overall playability, they are also much more susceptible to breaking than heavier strings, leading many guitarists to avoid the lightest strings.

Bass strings are also typically metal strings that have much heavier gauges to provide the required low end a bass needs. The range for bass strings will typically be from .040 to .130. Note that .130 is typically reserved for 5-string basses that have a low B string. By default, bass guitar strings are made to match the standard “long scale” bass guitar.
Though not widely used by professional musicians, bass strings are also manufactured in nylon wound strings. Often used by beginners, these strings are easier on the fingers than their metal counterparts, and can be used to help build calluses for use when later switching to metal strings. Of course there are always exceptions to the rule, and sometimes musicians enjoy the bass sound provided by nylon strings that sounds more similar to an upright bass. Case in point: Paul McCartney used nylon bass strings for his bass parts on Abbey Road.

The number of guitar string brands seems as numerous as the number of types of guitar strings. Often, guitarists just experiment with different brands until they find one that fits the sound they want and the budget they have. But here are a few popular brands that may lend a good start to your search.

Alice makes a wide variety of strings for acoustic, electric and bass guitar (as well as banjo and mandolin). Alice strings produce an accurate, bright tone and sounds great from the moment they are strung.  While the long term durability of the strings is not a forte of Alice, they will sound great for weeks of consistent playing, and the lower price level means Alice strings are still a cheaper option.

D’Addario has emerged as a world leader in the guitar strings industry. They offer a multitude of options for just about any fretted instrument. With this brand, you’ll be able to choose what kind of wind you want on your string as well as what metal you want to use. Since the company is so widespread, the prices remain reasonable.

Ernie Ball was one of the first musicians to begin playing with an unwound third (G) string, and as he noted the demand for a lighter gauge string, he developed his own string company that has now found notoriety worldwide. He called this lighter gauge set “Slinky,” since it provided more bending capability. One of the most popular sets today is the “Super Slinky,” which has gauges ranging from .009 to .042.
***

The real key to finding the best string for you is to try as many different string sets as possible. But these guidelines will help you on your way to finding your perfect sound. 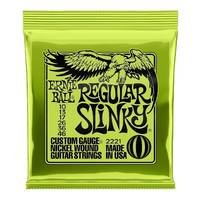