All about RCA Cables


Synopsis: RCA cables are the standard cable used to connect consumer A/V equipment such as TV's, DVD players and Foxtel boxes. RCA connections are also found in the pro audio field on mixing desks and...

RCA cables have been connecting home audio and video components since the early part of the 20th Century. Also known as phono connectors, the RCA designation came from the connectors’ early use as a method to connect record players to radios made by the Radio Corporation of America. Through the years, the number of uses of RCA cables expanded as they began to carry video signals in addition to sound, as well as branching into more technologically advanced methods of transfers, such as carrying stereo signals and, most recently, digital signals in addition to analog. Today an RCA cable can be found not only in the home, but also connecting DJ gear and other components used in live music and video settings.

To get an idea of the best uses for RCA cables, here we’ll break down the different uses of the versatile cables.

The original use of an RCA cable, as stated above, was to connect phonographs to radios—and this transfer of analog audio signals is still one of the most popular uses of the cables today, though their versatility is now far greater. Today finds RCA cables connecting mp3 players to stereos and PA systems and it finds them connecting the many inputs and outputs of mixing desks—they are one of the most abundantly used cables in the world of pro and home audio and video.

Traditional stereo RCA cables will have dual channels (two cables), one white for the left signal and the other red for the right signal (mono transmissions will only use the white connection). In today’s expanding audio market, however, many other colors have been introduced to correspond with new audio needs, more specifically for surround sound systems.

One complaint of RCA cables is that less well made models can lead to significant unwanted noise—it is advisable, no matter how the cables are being used, to ensure the cables have decent ground shields, such as the sprial wrapped RCA cables sold at Swamp.

Another thing to remember is that RCA cables come in a multitude of different configurations that can fit most any need. To plug an mp3 player into RCA connections, for example, you would want an 1/8” TRS connector to a dual RCA (for stereo connections). Dual RCA to RCA analog cables are commonly found in DJ Mixers and CDJs to preserve stereo production and panning qualities. Single RCA to RCA cables can be used to transfer mono signals, or as composite video connections, which opens the door to another use of RCA cables:

On typical home audiovisual configurations transferring analog signals (and not using a surround sound setup), the audio will be carried on two RCA cables for stereo sound (the aforementioned white and red connections) while video will be carried on another RCA cable—usually with a yellow connection. Using one RCA cable to transfer the video to a television is a format known as a composite video, as opposed to component video that carries three separate video signals on three cables. Composite video signal transfers carry no sound; therefore they must be combined with the audio RCA cables for the final product.

These are the reasons it has become popular, in the past few decades, for televisions (as well as DVD players and VCRs) to include at least one built-in set of three female RCA connectors, labeled with the colors yellow, white and red. Often, a built-in set will be found on the front of TVs to enable easy access to plug in video cameras and other devices.

The word composite in composite video refers to the fact that three separate source signals are brought together in these cables and then transmitted as a single line-level signal.

In addition to carrying traditional analog audio and visual signals, RCA cables now can be used to carry digital signals. S/PDIF (Sony/Philips Digital Interconnect Format) is the most commonly used form of transferring digital signals, and the RCA cable used for this format is typically a 75-ohm coaxial cable. The cable transfers a compressed digital audio signal usually to a home theater system that supports Dolby Digital or DTS surround sound.

Again, RCA cables and connections are some of the most widely used components in pro audio and home audiovisual systems, and numerous variations of types of RCA cables make them a very versatile tool when building a sound system, home theater or recording studio. Swamp has many of these different types of cables to fulfill all of your sound and video needs. 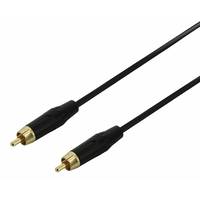 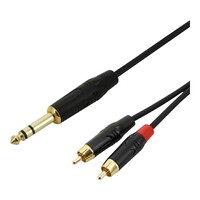