How To Build The Ultimate Pedalboard


Synopsis: If you’re a guitarist that’s been living under some sort of musical rock for the past couple of decades, you might not be privy to all the amazing things a solid pedalboard can do for your playing. Here is a guide for setting up the ultimate pedalboard. 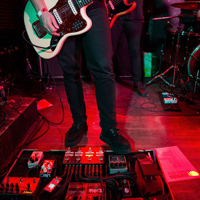 Put The Pedal To The Medal: How To Build The Ultimate Pedalboard

If you’re a guitarist that’s been living under some sort of musical rock for the past couple of decades, you might not be privy to all the amazing things a solid pedalboard can do for your playing. From helping you to stay in tune during performances to bestowing an array of incredible additional sounds and textures to your sonic toolbox, the pedalboard is a massively powerful asset that can benefit every guitarist.

But if you’re new to the guitar, the pedalboard can be an intimidating beast to reckon with. If this sounds like you, then you’re in luck. Today we’re breaking down everything about the world of pedalboards, from what they are and how to build them to an introduction of some effects pedals you’ll want to consider adding to your own board. Let’s get started! Anatomy of the pedalboard

Let’s begin by talking about what pedalboards are. To put it plainly, a pedalboard is a board that houses different guitar effects and maintenance pedals. If you’ve ever heard of the musical genre “shoegaze,” that name is referring to a type of music where guitarists spend a lot of time staring down at their feet to operate effects pedals. A pedalboard simply keeps all your pedals together.

There’s probably as many effects pedal combinations as there are guitarists out there. The type of board that best suits a blues player won’t always work for a metal guitarist, and the exact configuration of your pedalboard should match your unique playing style and performance needs.

What’s a pedalboard made of? Effects pedals and, well, any material they can be attached to: metal, plastic, plywood, the backs of your enemies. But just because you can use any old material to house your pedals doesn’t mean you should. For example, if you build a pedalboard out of cheap wood or flimsy plastic, you might run into serious problems if you’re someone that performs and records frequently. Flimsy pedalboards don’t travel well.

Now, let’s talk about what sorts of pedal options you’ve got for your pedalboard. Like I mentioned before, the unique combination of pedals you choose for your board will completely depend on your playing habits, style, performance needs and level of skill. To help you decide what sort of pedals should be on your board, let’s briefly talk about your options:

Lots of pedals are optional for an aspiring guitarist’s pedalboard. This is not one of them. Tuning pedals are essential for two reasons. The first and most important reason you’ll need one of these bad boys on your board is because it’s a tool designed to keep your guitar in tune. Rather than stopping a show to tune, this pedal listens to your playing and provides a visual way to see if each of your strings is flat, sharp or tuned correctly.

The second is that all tuning pedals double as muting pedals. Why in the heck would you ever want to mute your guitar? Electric, acoustic and classical guitars often feedback and buzz on stage when they’re not being played. The option to mute your instrument gives you the confidence to be heard or silent when you need to be during your live sets. Your sound engineer will thank you for having a tuning pedal attached to your board.

Most guitarists have distortion pedals on their boards. This pedal adds a thick crunch to the guitar’s sound that’s become a staple of many genres including pop, rock, blues and metal to name a few. While some pedals are considered to be specialized and only for players working in specific genres, the distorted guitar sound has become inseparable from music in many cultures around the world. You don’t need this pedal on your board necessarily, but you should probably have it.

On the surface, the benefits delay pedals deliver seem pretty simple––they take the sound of your guitar and delay it a little bit. But the customization of these pedals gives players options to shape their playing through delay in some incredible ways. Shorter timed delays result in an effect that gives riffs and solos an eerie ping pong effect, while longer ones serve to thicken up a player’s sound.

Reverb adds a washy cavernous sound to chords, riffs and melodies. These pedals are designed for players who create soundscapes and moods, not for those who specialize in crafting in-your-face riffs and conventional parts that most songs rely on. Indie rock and pop are beginning to embrace guitar parts that rely on reverb more and more, so if those are genres you’re interested in, this is a pedal you’ll want to explore.

Compression is an effect that’s usually added into music during the production and editing phase, but this pedal gives guitarists access to it on stage and in the recording studio. Compression basically squashes your sound by removing dynamics from the sound you’re producing. This pedal is best suited for guitarists playing conventional parts––chord progressions, power chords, riffs, solos. The dynamic broadness found often shoegaze, indie and ambient genres doesn’t need to be compressed.

Featured in everything from cheesy action movie soundtracks from the 70’s to Rage Against The Machine songs, the wah-wah pedal boasts a retro feel crucial in funk and classic rock. Rather than pressing a button down and completely changing the sound, this pedal allows players to change the frequency of their playing gradually.

Volume pedals are pretty simple. They let guitarists fade the volume of their playing in and out. These pedals are especially helpful for those working in less conventional and more ambient genres with a focus on dynamics and nuances in sound.

The chorus effect layers different similarly pitched frequencies on top of each other to create a sound that’s both thick and ghostly. Guitarists like to use this effect during solos and other parts of their playing they want to highlight.

Looper pedals allow guitarists to record parts of their playing and loop those sections over and over again. In tandem with delay and reverb effects, this pedal gives players the ability to create soundscapes that transcend conventional guitar sounds.

These aren’t all the effects pedals out there, but the ones I mentioned are those you’ll most likely want to add to your pedalboard. Depending on your needs and how much money and time you’re willing to spend, you can build your own pedalboard or buy one that’s pre-made. There’s a couple of big advantages for guitarists who buy their boards from music shops. These pedalboards typically come with protective gig bags and are generally designed to stand up against the wear and tear of heavy use and touring. Another benefit is that these boards come with standard effects pedals so you’re not having to buy each one individually.

The guitarists who typically build their own boards are heavily experienced players who rely on specific combinations of pedals to produce their music. For these players, stock distortion and delay pedals simply will not do. Going your own way as far as building pedalboard goes lets you get picky about not only what effects pedals you want to throw into the mix but also how you want things arranged. If you’re set on building your own board, just make sure to carry it around in a protective case. Accidents happen all the time on stage and on the way to shows, so make sure your pedalboard is protected.

It’s important to note here that the more pedals on your board the more complicated routing them all will be. If you need extra help routing your pedalboard, check out this helpful video. Matching your pedalboard to your needs

Every guitarist's pedalboard should be built differently according to their playing habits and style, but there’s a few pedals every player should have. All guitarists need a tuning pedal, and most can benefit from a basic effects pedal setup including distortion and delay. How these pedals are arranged should depend on things like what pedals you typically rely on the most, where you’re positioned on stage and what foot you plan on using to activate your pedalboard. If you’re new to the world of pedalboards, be prepared for a bit of trial and error to be involved when it comes to customising your own board for the first time.

Why more isn’t always better when it comes to pedals

Before you buy every pedal known to man and slap it on your board, it’s good to remember that more doesn’t always translate to better in music, and effects pedals are no acception. Starting small with the basics and building from there will help you get the most out of your pedalboard. 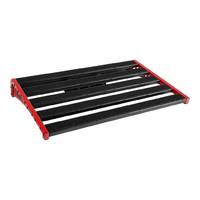