Synopsis: The gauge of a guitar string refers to its diameter (thickness). Why is gauge important? Because there’s a great deal of difference in tone and feel across different gauges. From Mandolin to 5 string bass, you must match your gauge to your style! Guitar String Gauge––Slinky, Hybrid or Extra Heavy?
When most people think about guitarists, they typically conjure up images of virtuosic musicians taking the stage to shred in front of thousands of adoring fans. Music accessories like guitar strings typically aren’t in the forefront of people’s minds, even if they happen to play guitar. But the truth is that the type of strings a guitarist chooses for their instrument can have a massive bearing on their sound and performance. In particular, the gauge of string a player chooses makes a monumental impact on not just their playing technique but also the way their instrument sounds. Guitar string gauges might happen to be the unsexiest topic in all of music, but being familiar with them is vital knowledge for a guitarist to have.

In this article, we’ll break down everything about the world of guitar string gauges, from defining just what the heck string gauges are down to helping readers determine what gauge is right for them and their unique playing style. Let’s jump in:

What is a string gauge?
So glad you asked! To put it simply, the gauge of a guitar string refers to its diameter (thickness). Why is a string’s gauge important? Because there’s a universe of difference between a bass guitarist’s strings and those of a folky finger-picking guitarist. The gauge of strings that best accommodate some guitarists won’t work for others, so determining what gauge you’re most comfortable playing on is an essential aspect of being a knowledgeable, fully equipped musician.

To help players best understand the gauge of strings they’re playing with, a system of numbers measured in millimeters is typically used. For example, a 0.10 refers to a string that breaks down to being 0.1 of a millimeter. Since this number is extremely small, it refers to the thinnest and highest guitar string. In contrast, a string dawning the 0.46 numerical identifier is used to represent the thickest and lowest guitar string out of a complete set of six. This range of strings is sometimes called “10-46” or simply “Tens.”

The gauge of a guitarist’s strings informs everything from a player’s tone to the elasticity of their playing (how easy the notes are to bend) to the lifespan of the strings themselves. Other important factors like a guitarist’s instrument (acoustic, electric, classical or bass) work in tandem with the gauge of strings to help support a player’s sound, style and technique. Sure, a guitarist’s string gauge selection isn’t nearly as dramatic as the difference in sound between a bass and classical guitar, but for serious players and beginners alike, the gauge of strings ends up making a significant difference in not only sound but also in performance. Why choose different gauges?
Have you ever walked into a music store, gotten overwhelmed by the wall of guitar strings available and grabbed the first option available because you were so intimidated? Don’t worry, you’re not alone. If you’re not familiar with gauges, they can be tricky to navigate, but taking the time to choose the best gauge for you will improve your sound and playing. It’s also important to note here that lots of great guitarists choose different string gauges for their various guitars. For example, a guitarist in a versatile rock outfit might have strings with a heavy gauge picked out for their electric guitar and a thinner gauge selected for their acoustic. One size doesn’t fit all anywhere in music, and this concept definitely applies to string gauges.

Many players base their gauge selections purely off the scale of their instrument. This refers to the distance between the neck of their guitar (this is the top part of the instrument where the strings connect to pegs) and the bridge (this is the center of the instrument where the strings end). Strings are typically gauged within particular ranges of thickness so that they can be tuned as efficiently as possible. If you’re new to playing the guitar, this might come as a bit of a shock, but it’s true. String manufacturers usually try to make things as easy on players as possible.

This predictability in terms of how strings are gauged is why musicians ranging from heavy metal guitarists to accomplished classical guitarists can change out their strings and get back to playing with relative ease. Bass strings fall within a certain level of thickness to allow players to get in and stay in tune with quickness and efficiency. The same goes for acoustic, classical and electric strings. Now, you might have noticed that a bass guitarist’s strings are much thicker than an electric guitarist’s. This massive diameter difference has to do with the fact that in order for bassists to play low, booming notes, their strings are required to be thicker and denser than those of electric and acoustic players’ in order to get the job done.

Matching gauge to playing style and preferred tunings
The art of matching the right string gauge to a guitarist’s unique style of playing isn’t typically too difficult to do, but it does require some trial and error for unseasoned players. If you’re unsure how to select your string gauge, here’s a few tips to get you started. If you typically play rhythm parts or are just hard on your strings in general, a heavy gauge of strings is probably your best bet. Going with a thick gauge ensures that your strings won’t break the second you strum hard during practice, recording or a performance.

Guitarists who tune their strings down––this usually includes heavy metal and rock musicians––usually prefer heavier gauges of strings due to the fact that their thickness can handle notes played at a low range. The opposite goes for players who tune their guitars higher than conventional tuning patterns. Just make sure not to tune your guitar too high or you’ll put yourself at risk for breaking a string. Why do strings sound and feel the way they do?
By design, guitar strings look, feel and play completely differently from instrument to instrument. If you’ve ever played both a classical and electric guitar, you know firsthand how dramatically different of an experience working with both instruments can be. The reason behind this comes from the fact that different strings are comprised of different materials. Believe it or not, a classical guitar’s strings are made out of nylon while electric, acoustic and bass strings are made up of materials ranging from Phosphor bronze to aluminum, silver and tin depending on the brand of string. And you thought guitar strings were boring!

Sometimes strings with a lighter gauge feel heavier than they actually are because they’re coated with extra materials to extend their life and improve their sound. To find out not only what gauge of string but also if your playing benefits from using coated strings, some experimentation is in order. Popular Gauges of Strings
Popular gauges of strings are, well, popular for a good reason. These gauges fall within conventional ranges of thickness that best accommodate most musicians. This means that gauges falling at the most extreme levels of thickness or thinness are typically reserved for players who play within extreme ranges of sound. A metal guitarist relying on the extra heavy gauge option is a good example. To make sure you pick the right gauge for you, don’t simply buy the first pack of strings you see. Make sure to read not only the string’s descriptive name (regular, light, heavy) but to also pay attention that that millimeter measurement system we talked about earlier. In case you forgot, that’s the 0.10-0.46 system that measures the diameter of strings down a fraction of a millimeter. Follow the gauge name and numbering system, and you’ll be sure not to inadvertently buy the wrong strings.

Popular Gauges and Models that we stock!

Check out the full range of Ernie Ball Electric Strings.

Check out the full range of Ernie Ball Steel Strings.

We also stock Elixir and D'Addario, plus, great value options from Alice.

So, now that you know a whole bunch about string gauges, what is there left to do? Experimentation with different brands and gauges is the best way to find out what type of strings work best for you. Good luck! 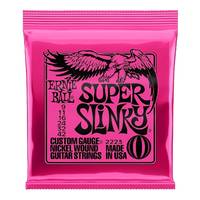 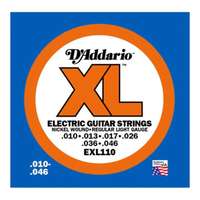 Have not you heard of the metric system that most

23 July 2020
My micrometer measures to 1/100th of a millimeter. It does not measure in 1/1000th of an inch. I don't care if you post this, just read it. I wish to downsize the string size to reduce the fretting pressure. Unfortunately America has not heard of an inconsequential Frenchman named Napoleon 1. Try finding a list of available string diameters in metric. It's pathetic USA. Stop being so bloody minded and join the rest of the engineering world. I have to go to my local shop and stuff around trying to find what are the next sizes down to 0.28mm, 0.44mm, o.62mm, 0.82mm. Maybe we can read the conversion chart ON THE INSIDE OF THE SEALED PACKAGE. Perhaps I can measure through the sealed soft package. How the hell did you people ever get to the moon & back? Steam driven? Silly me, I should be looking at European string manufacturers and not waste my time with your stupid archaic obsolete thinking.