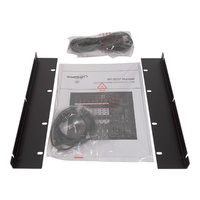 In-Built Compressors
Each of the first four XLR mic channels (1-4) features an in-built, 1-knob compressor that has intuitive threshold, ratio, attack and release presets. Increasing the compression on a channel will lower the dynamic range of the signal and increases it perceived loudness. The loud peaks are squashed down and the quiet sections are boosted. Use the compressor simultaneously with the gain knob for best results.

19" Rack Mountable - Rack Rails Included
The entire S-MK2 mixing desk series are 19" rack mountable, with the rack rails required included with every model. The rack rails simply attach to the side of the mixer with 3 screws already present on the mixer, then it is ready to be placed into any 19 inch rack case or frame.

7-Band Equalizer - with Feedback Detection!
A 7-band EQ enables the S12 to be tweaked for particulars rooms and venues. The EQ can be placed over the "Main" outputs, or alternatively over the "Monitor" output. Equipped with a state of the art FBQ feedback detection option, that will light up the LED on each of the 7 EQ controls when excess signal in the frequency range is detected. This gives the sound technician a visual guide as to what frequency band should be dropped to reduce the chance of feedback occurring.

AUX / Monitor Sends
Equipped with a monitor (AUX) send, that allows an additional "mix" of channels to be sent from the mixing console to foldback speakers or outboard effects. Ideal for creating foldback mixes for on stage performers. The FX channel can also be used as a 2nd AUX send.

In-Built Effects
Each channel has an FX control knob that will send the signal to the in-built stereo effects processor. Includes all the classic preset "mixing effects"; reverb, delay, chorus, flanger, etc. Main volume controls for the FX send and return enable you mix the "dry" and "wet" (effected) signals together for optimal results.

Voice Cancellation - Great for Karaoke
Here you have a filter circuitry that lets you almost entirely remove the vocal portion of a recording. The filter is constructed in such a way that voice frequencies are targeted without greatly affecting the rest of the signal. Additionally, the filter seizes only the middle of the stereo image, exactly where the vocals are typically located.

Possible applications for the Voice Canceler are obvious: you can very simply stage background music for Karaoke events. Of course, you can also do this at home or at your rehearsal room before you hit the stage. Singers with their own band can practice singing difficult parts using a complete playback from a iPod / CD, thus minimising band rehearsal time.

USB Audio Interface Functionality
The S-series mixing consoles feature a USB input/output with quality A/D, D/A converters for 16-bit, 48kHz recording quality. The audio sent to the computer from the mixer is identical to the stereo MAIN MIX output signal. Audio from the computer can also be routed back into the mixer signal path for playback. It should be noted that the USB circuit cannot be used to record and playback signal simultaneously.

By: Greg on 25 March 2018
You will not find better value for money. Expect to pay twice as much for any other mixer with as many features as this. Very quiet. Nice effects. Very versatile. Great having such simple compressors. Haven't tried recording with it though. I've had mine six months now and I use it professionally. Recently a fault occurred when I was running off a generator at a festival. I suspected the generator straight away. Nearby stallholders lights seemed to be flickering bright then dim and it cut out a couple of times. Got it home and saw some liquid had leaked from the internal power supply unit. I phoned Swamp, told them everything, including the generator bit, and asked if they could sell me a replacement power supply. Instead they replaced the power supply under warranty! And promptly. No complaints about the product or the service!
5 (5)

By: Warwick Symons on 28 August 2015
The mixing desk worked out of the box. All checked out OK. Have set it up in our Church for 4 microphones, radio hand mike and radio lapel mike. Also inputs for iPod and Laptop play back. MON to input of fold back speaker and FX to input of laptop for recording.
5 (5)

By: Cradles on 26 January 2015
A pretty straight forward machine. Does what it says it does. Easy plug in and play. The only down fall is recording individual tracks. The return signal from the USB bleeds into the next track that is recording. Turning down the USB return helps but it's still there. I haven't found a way around this, and the manual doesn't help.
5 (5)

By: Ray Simpkin on 28 November 2014
This desk is by far the best value for $ desk I've used. Only used for a few gigs so far but there hasn't been a moment that I regretted buying it.
5 (5)